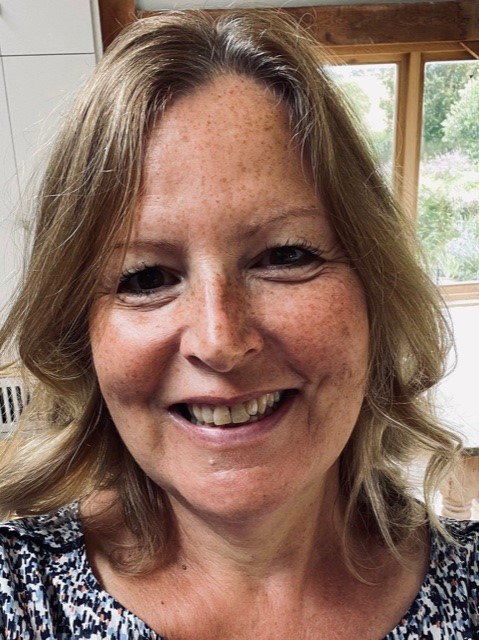 It was June 2017. I felt totally well. I had been to the gym and was driving to see a friend. I suddenly came to in the car and felt incredibly dizzy, couldn’t see properly, and vomited several times. I was drifting in and out of consciousness. Luckily for me our neighbours were in the garden and called an ambulance. This is all pieced together from what I was told later. By this time 90 minutes had passed since I had had a stroke. It was past the golden hour to save someone with a brain injury.

I remember vague things about being in the Accident and Emergency Department. The stroke nurses asked me to move my limbs and to identify a picture of a pear. I had been given thrombolysis drugs to break down the clot and was awake at times as the clot in my brain moved. I deteriorated and was blue-lighted to a London hospital. I remember thrashing my limbs around in the ambulance but I was totally helpless to stop it. Little did I know that I had lost use of my left arm and leg and the power of speech. It was now 10 hours with only 50% oxygen going to my brain.

I was given a thrombectomy by my life-saving neurosurgeons. They put a 3mm tube into my groin that grabbed the clot out of my brain. Three days followed in Neuro Intensive Care. As soon as the clot was removed, I could move all my limbs and talk again and actually be understood! I still think it is a miracle and count myself as one of the luckiest people alive.

Thrombectomy had only been commissioned by the National Health Service three months before my stroke. Three months earlier and my best outcome would have been loss of movement on my left side and my speech. It was such a new procedure that there was much excitement on the ward as the medics showed photos of my clot around!

So here I was aged 53 with a stroke. That doesn’t happen, right? People who have strokes are old and sit in wheelchairs, dribbling. That’s all I knew about a stroke. This can’t be true. I didn’t think about the long term, but presumed I’d be over it in a few weeks like a bad case of measles. Four years later I am still recovering.

I was put on blood thinners and statins, as is protocol. My brain had to relearn how to do everything: walk, balance, use stairs, brush my teeth. It was only later as I attempted to do more things that I realised how injured my brain was. Talking to anyone exhausted me. I couldn’t concentrate or focus. My brain put itself and me into a protective aura, which I called a “banana.”

For a long time, I wasn’t “present” in the room even though I was physically there. I had to sit in a chair with sides to feel “present” and safe. Lights burnt the back of my brain. Any noise was like a screeching parrot. My spatial awareness was poor. The list could go on.

If my brain was really tired, the “banana” would grow, and I would have to go to bed. Thanks to my fabulous occupational therapist, I learnt the art of pacing and planning my diary. I learnt to be patient with myself. I had good days and very bad days.  Something that felt easy one day was a real challenge the next. My life had become full of endless challenges. I didn’t ask for this!

An hour’s coffee with a friend would take me two days to recover. After six months, I could drive for five minutes. Supermarkets, cinemas, pubs, hospitals, anything you take for granted, were impossible for me to navigate. It was all too much for my brain to process. You may as well have asked me to climb Mount Everest.

In one day, my life changed completely. Four years later and with a lot of determination and hard work I have made great strides. I focus on the small wins, (e.g., I have driven in France). I’ve started volunteering at a charity and am learning Spanish. I taught myself to run a 5K. I’m a mentor for young stroke survivors. I am so much more independent.

Everyone says I look “fine.” A brain injury is a hidden disability. If I had a broken leg its very physical presence would have made people (and me) remember how ill I was. It took a lot of positive thinking to accept what had happened to me. Without my incredible husband and amazing family, friends, and occupational therapist to continue to support me, life could have been incredibly dark. Yes, I am a “new me,” and I have a lot to be grateful for.

Wendy Wolstencroft lives in a small village in Hertfordshire, England, with her husband. Prior to her stroke, she worked at Citizens Advice Bureau, an organization that assists people with legal, debt, consumer, and housing issues in the United Kingdom. She now volunteers at Oxfam, an organization working to alleviate global poverty. She enjoys walking her two dogs, traveling, working out, running, and spending time with family and friends.

Thank you, Wendy, for sharing your story of overcoming adversity with our readers.