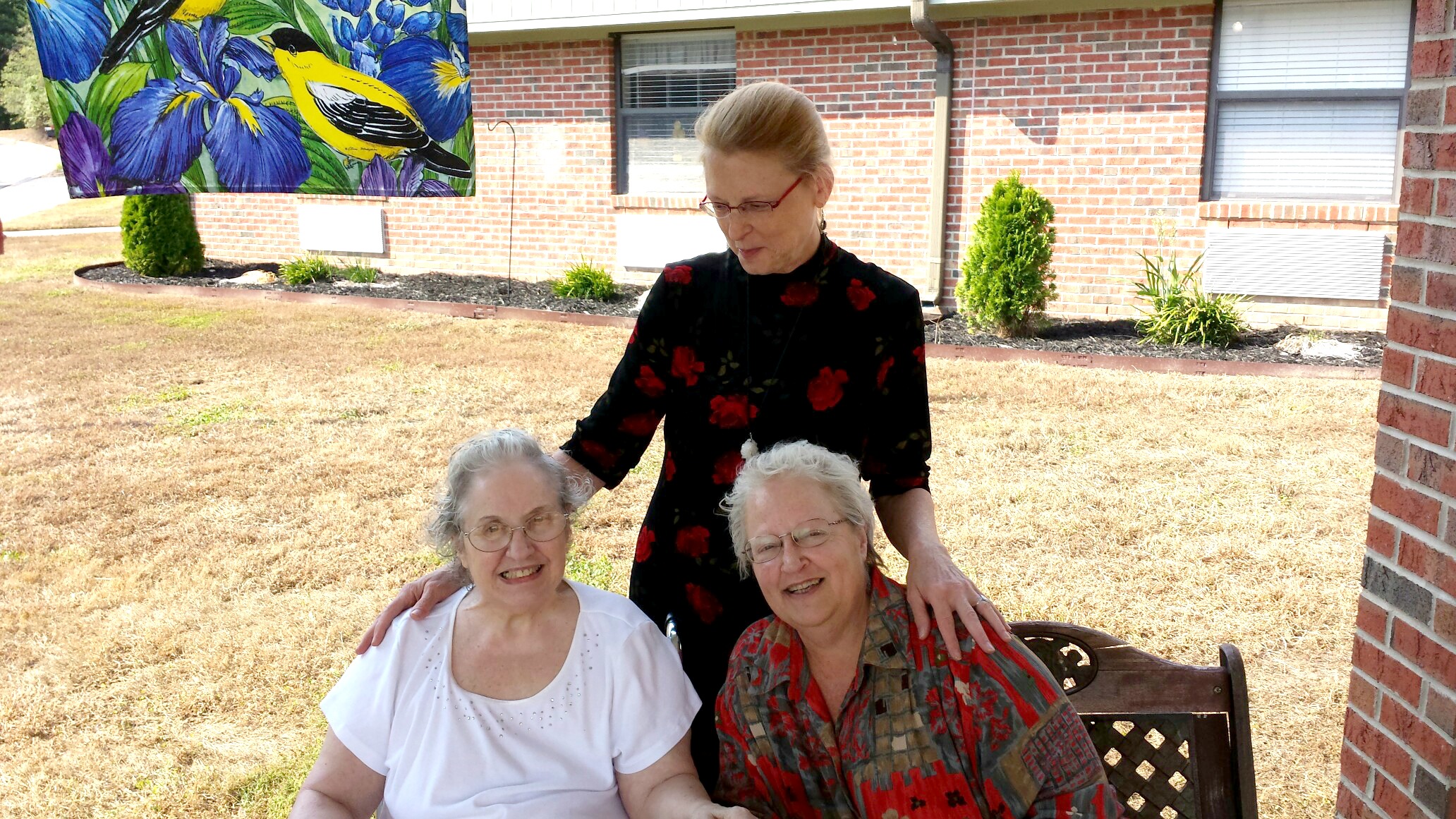 Throughout the month of October, we are dedicating our blog to stories of breast cancer. This blog post, from guest blogger Cynthia, is the fourth in our series.

Cynthia is the mother of 3 fabulous now-grown homeschooled children, now married to the love of her life and living in wooded, wedded bliss in a tiny cabin where they blog at Gypsum Moon and sell amazing things on Etsy at Gypsum Moon Vintage,  Gypsum Moon Style, and Gypsum Moon Rocks .

My breast cancer story is actually a three-in-one, a very personal Trilogy of Terror, if you will (apologies to Karen) because I simply can’t tell my story without also telling the story of my mother-in-law, Mary, who was diagnosed just 3 months before I was, and the story of my wife, Kay, who was diagnosed a year after her mother’s mastectomy. Within a one year period, breast cancer didn’t just touch our lives – it hit our family like a freight train.

Mary was 78 at the time of her diagnosis of invasive ductal carcinoma with lymph node involvement in March of 2014, following a routine mammogram. Mary had cared for her own elderly mother a decade earlier when metastatic breast cancer slowly killed her, so Mary’s life had already been impacted in a huge way by this disease. Mary initially chose to go with a lumpectomy, which showed far more lymph node involvement that was originally suspected, and so she underwent a mastectomy a month later. This was followed by yet a third surgery for lymphedema three weeks after the mastectomy. Now, at 80, Mary has survived a near-death brush with a vitamin B-12 deficiency, and is thriving and happy again, but it has been a long, hard road to recovery, and the fear of recurrence haunts her.

While my wife, Kay, and I were going through Mary’s breast cancer journey with her, I had started feeling crazy fatigued, and when I found a tiny lump in my right breast during a monthly self-exam, I wasn’t as surprised as I could’ve been when I was handed the same diagnosis as Mary: invasive ductal carcinoma, type 2. I am uninsured, and we went through a hellish waiting period before I was accepted into a program that’s unique to North Carolina, called BCCCP, which covers all cancer-related medical expenses for those who qualify for it. I was presented with the option of a lumpectomy, as Mary had been – in fact, I felt almost pressured into choosing that option, since I had no apparent lymph node involvement – but I ultimately decided that a mastectomy was what I wanted, and in July of 2014, that’s what I did, with Kay by my side in a horribly uncomfortable recliner the night after the surgery. I did well after the mastectomy, in spite of a bout with depression afterwards, but since that resulted in me starting on an antidepressant that’s changed my life for the better, I consider that a benefit of my cancer journey.

As my depression lightened and we looked forward to putting our lives and our business back together, Kay found her own lump during her monthly self-exam, and we were right back on the breast cancer merry-go-round. She was diagnosed in March of 2015, but her diagnosis went further than Mary’s and mine had: Kay also had lymph node involvement that was much more extensive than Mary’s had been. Again, because Kay was uninsured, we waited for the North Carolina BCCCP to officially approve her, and it was far more terrifying than my wait had been, because we already knew that Kay would have to have chemotherapy before her mastectomy, and radiation afterwards. Every day we waited was agonizing, as we tried to stay positive, and not to imagine the cancer spreading. The initial health care provider went ahead and placed Kay’s port for chemo – an outpatient surgical procedure – but then refused to start chemotherapy until they received Kay’s actual insurance identification number, although she had been verbally approved. By July, we felt we could wait no longer, and changed providers.

We were very grateful to find one that would start treatment right away. The chemical oncologist who treated Kay, after hearing our story, told us immediately how grateful she is every day to work in a place where it truly does not matter whether the patient is insured or not. Kay’s chemo started July 3, 2015, and it dominated our lives for the next four months: every two weeks for the first 2-1/2 months, then once a week for the next 6 weeks, with a few particularly unpleasant side detours including the need for blood transfusions. Chemo ended November 25, and Kay had a mastectomy on December 28. In early February, 2016, she began radiation, daily treatments that meant we drove an hour for a 5 minute appointment five days a week. Radiation was over at the end of March, and today, Kay feels fabulous – all the precious energy that was stolen by not just the cancer, but by the chemo and the radiation, has returned and surpassed itself – and her glorious, curly white hair has come back, too.

Once again, we find ourselves in the situation of being extremely grateful, and of facing the slightly daunting task of bouncing back with our business – but bounce back we will, because that’s what we do!

Thank you Cynthia for sharing your inspiring story!