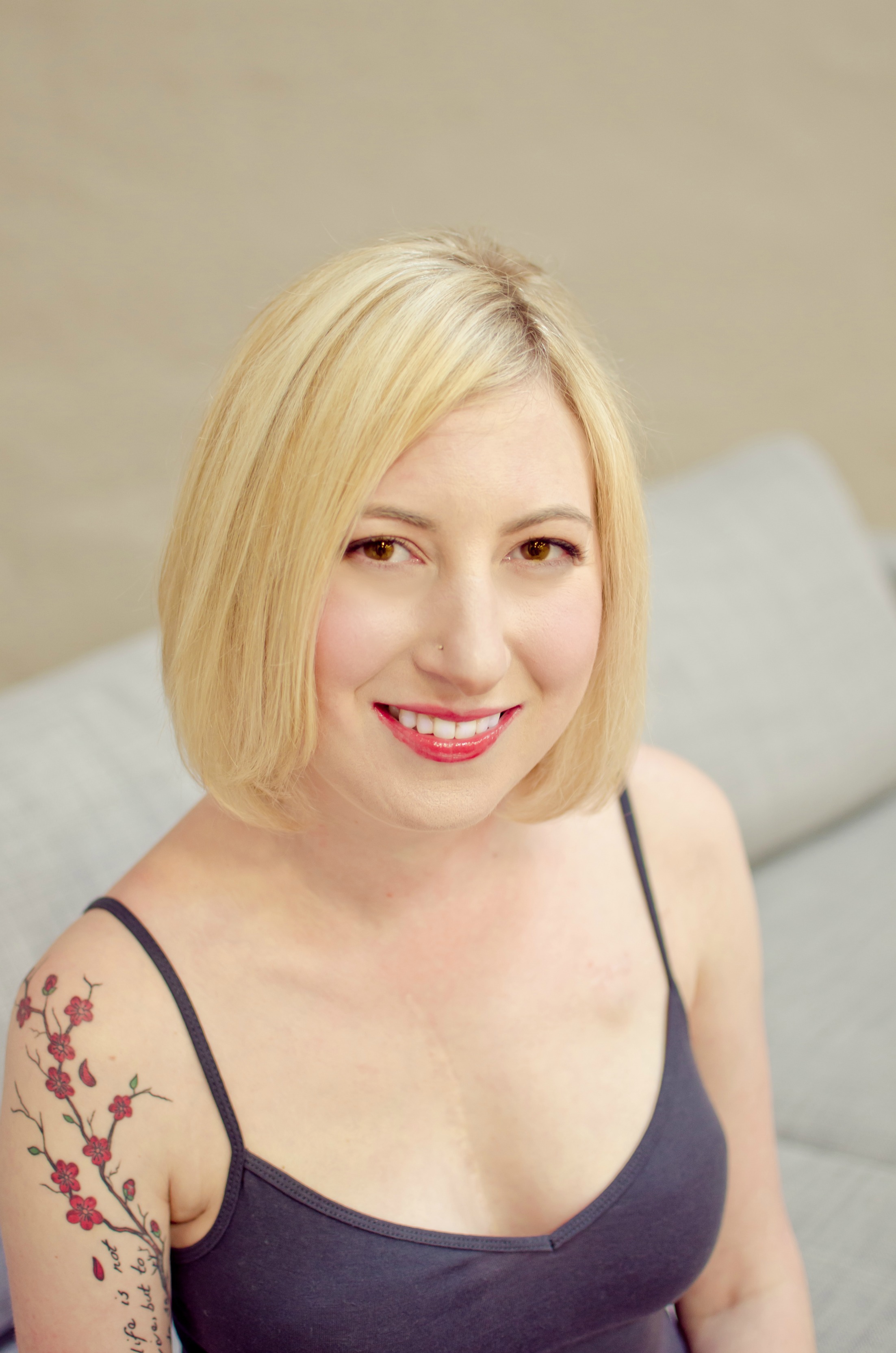 Our latest guest post in our month long series dedicated to raising breast cancer awareness comes from Marla Wexler, a breast cancer survivor whose powerful image and quote about mastectomy went viral when it was first posted on Instagram nearly 2 years ago.

MarlaJan Wexler is 35 years old, was born with tetralogy of Fallot, a complex congenital heart defect, and had 4 open-heart surgeries by the time she was 6. She went from pediatric cardiac ICU patient to pediatric cardiac ICU nurse until being diagnosed with systemic lupus erythematous (lupus). Due to complications from the disease, she was forced her to give up her nursing career. Since 2008 she has been diagnosed with lupus and multiple overlapping autoimmune diseases, cervical cancer, and underwent a double mastectomy at age 33 after a pre-cancerous lump was found in her breast.

She’s the creator and author of the blog Luck Fupus (www.luckfupus.com) which she writes about the day-to-day and long-term struggles of living with multiple chronic illnesses. She’s known for her hilarious, non-sugar coated, keep-it-real style of writing. She used her blog as a platform to help her become an ePatient advocate, and she now travels the country attending healthcare conferences, speaking publicly sharing her story, educating and advocating for patients across the globe.

Breast Cancer has always been a black cloud looming over the heads of my family, tormenting every single woman on my mom’s side. For us, it felt a matter of “when” not “if.”

My grandmother lost her life to breast cancer at age 46 in 1961, leaving behind two daughters, ages 14 and 9. My mom was 9 when she learned the destruction breast cancer leaves behind in its path.

Growing up, my mother never hid how the disease affected her, and she was adamant in making sure my older sister and I became aware at a young age. I remember the plastic-coated paper with the pale pink plastic rope hanging from the shower head. On it were instructions on how to perform a monthly breast-self examination in the shower, and I remember giving myself exams before I even wore a bra.

In the early 1990’s, my mom participated in a clinical trial, designed to see whether a certain nonsteroidal, anti-estrogen drug could reduce the incidence of breast cancer in women who were at high risk for development of the disease. At the time, this drug was prescribed for 5-10 years after a patient received surgery, radiation, and/or chemotherapy for the treatment of hormone-receptor positive breast cancers. It works by preventing cancer cells from getting the hormones they need to grow by attaching to the hormone receptor of the cancer cell, and blocks estrogen from attaching to the cancer.

The final report of the trial was issued in 2005, with data showing the results of treatment to be highly significant with a 49% reduction in the number of invasive breast cancers seen across all age groups.

I assumed that once I was finished having children, in addition to begin having mammograms at an early age, I would take [the drug] as a preventative measure due to my strong family history; 9 women in total on my mother’s side and my paternal grandmother developed breast cancer.

I was diagnosed at age 26 with Systemic Lupus Erythematosus (lupus), an autoimmune disease that can damage any organ in the body. A rare, but potentially serious side effect of [the treatment mentioned above] is the development of blood clots in the lungs or veins. Lupus increases a person’s risk for developing blood clots and having strokes, so whether I would take [the drug] preventatively or as treatment for breast cancer, due to lupus, it would never be an option for me.

At 32 my world was rocked when a lump was found in my left breast after undergoing a breast MRI. A screening mammogram just 6 months prior was clear, and I almost blew the MRI off because I figured there was no need. I was in the middle of a severe lupus flare, and undergoing another test seemed daunting.

When I received the call from the oncology surgeon, I was floored. I would have been less shocked if a doctor called up and told me I was pregnant (I’m infertile). Those moments after I hung up are still so fresh in my mind, yet at the same time, seem like a blur.

I chose to undergo a double mastectomy with reconstruction rather than a lumpectomy, a decision I did not come to lightly. In addition to lupus and multiple other autoimmune diseases, I was born with a complex congenital heart disease, and in 2010 I was treated for stage a1a cervical cancer. Yep, I drew the short straw in the family gene pool.

I felt like moving forward with the mastectomy was my one way to gain some semblance of control over one of the many diseases I’ve faced. Even though I can do everything possible make sure they don’t occur, I can’t control my lupus flares or do anything to prevent my pulmonary valve from failing, a complication with my heart defect.

There are a number of factors leading to my decision, but at the end of the day, greatly reducing my chances of hearing “Marla, you have breast cancer,” was reason enough for me.

December 1st, 2016 is the two year anniversary of my double mastectomy. It was by far the most physically and mentally painful thing I’ve endured in my life, and believe me when I say I’ve endured a lot. There were tears, infections, setbacks, hospitalizations, physical therapy, days I would stare at the ceiling and curse myself for making this decision. At the time, it felt there was no light at the end of an extremely long tunnel. But now, almost two years out, I can say that I am at peace with my choice and feel better knowing this one thing is off my chest. Or, two things as the case may be…

I’ll be here all day, folks.

Actually, because of the mastectomy, I’m happy to say that I’ll be sticking around for much longer.

Thank you Marla for sharing your inspiring story!