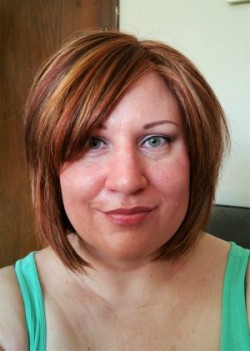 Chelsea Freund- At the age of 16 Chelsea left home to live on the campus of a public school for the Arts. From 18-21, she spent three spring-fall seasons on Mackinac Island in Michigan to earn money and gain experience. At 21, Chelsea and her friend took some time to travel and camp around the U.S. She lived in a few different states and enjoyed every aspect of life.

When Chelsea was approximately 5 years of age, she started experiencing bouts of alopecia areata. By the age of 27 her hair started falling out extremely fast, she eventually shaved off the few clumps of hair that clung to her head and started wearing wigs. In 2005, Chelsea was diagnosed with Hashimoto’s Thyroiditis. Since around age 23-24 she has had the diagnosis of fibromyalgia. In July 2010 she suddenly came down with crushing fatigue and vertigo, and her vision became blurred.

In July 2011, Chelsea had a shunt placed surgically that continuously removes fluid from her brain so it doesn’t build up and press on her nerves and cerebellum or she would lose most of her vision and ability to walk. In November 2015 Chelsea meet a naturopath to try to deal with her fibromyalgia issues. She tested for Lyme disease and her tests came back positive. She has been infected with the Lyme bacteria for a total of seven years now, untreated. The University of Minnesota doctors that have taken up her case are concerned that she still has a rare disease in addition to the Lyme. For now, Chelsea still get the label of “rare disease.”

You can find Chelsea at Twitter: @kiwifreund, or Blog: TheSickandtheDating.com

Struggles of Finding a Diagnosis

If you were to pass me on the street, you might think that I had MS. You might even think I had a stroke. One well-meaning woman stopped me and asked if I could see a garbage can that was in my path – which was funny to me, because she was also blocking me, and I was waiting for her to pass so I could step around the can with the help of my cane.

It’s obvious to everyone that I encounter that I have something very wrong with me because my arms and legs tremble and my face is partially paralyzed with my eyelids nearly closed. Although I can’t always see very well, I’m very aware at the hush that falls over groups as they observe my physical ailments and secretly count themselves luckier than me.

It’s obvious, that is, until I’m in a doctor’s office. I’ve been sick for six years now, and I’ve attempted to get care from rheumatologists, immunologists, naturopaths, otopharyngolaryngologist, neurologists, neurosurgeons, and primary care doctors. I’ve had EEGs, EMGs, VMGs, MRIs, CT scans, x-rays, EKGs, allergy tests, hearing tests, bone marrow biopsies, nuclear shunt studies, countless blood tests, genetic tests, psychological testing, biofeedback counseling and lumbar punctures. I’ve seen over 50 doctors now to try to figure out what it is that is causing my symptoms, and all but a few have told me to go away and not come back (and a few have told me to get counseling because it’s all psychosomatic anyway).

What I am puzzled by is doctors telling me that “nothing is wrong” when they see my symptoms but they rely solely on tests that haven’t necessarily been significantly improved in a few decades. Saying “I don’t know” is far better than saying that my symptoms are my imagination.

Before I became sick with this mystery disease, I had been diagnosed with fibromyalgia, Hashimoto’s thyroiditis and alopecia universalis, but I was managing all three quite well, even with pain and fatigue taking me down now and then. By nature I am a gypsy at heart and enjoy traveling; I have lived in six states in 20 years, and moved 23 times since I turned 18. I’m on my second passport and love having “people” to visit – my boyfriend jokes that if someone mentions a city or country, it’s likely I know someone there.

These symptoms have turned my life upside down. The fatigue is crushing and constant from the time I wake up. I also have non-stop vertigo. When I’m upright, fluid builds up around my brain stem and presses on the nerves that lead to my face so that my forehead and eyelids become paralyzed, and my nose and tongue become numb. My neck, arms and legs develop tremors. My toes turn inward when I walk. My voice loses intonation and sometimes I stutter or lose my memory or word recall. When I lay flat, the fluid moves away and the symptoms lessen greatly.

One neurosurgeon agreed to implant a shunt to try to move the fluid after I had some temporary relief after two lumbar punctures. However, I discovered that I am allergic to the shunts, resulting in horrible pain in my abdomen where the drainage catheter lies, and my body builds up 20 years’ worth of scar tissue in 2 weeks and strangles the shunts, so they fail in quick succession. After 10 surgeries, he declined to continue surgeries, and I lost my job, my car, and my ability to sit upright for more than 30 minutes. I still have a shunt but it stopped working 17 days after being placed.

I once road tripped around the U.S. to pick a new place to live on a whim, and I have moved across the U.S. three times. These days I spend most of my time lying flat in bed so the fluid doesn’t build up in my brain. My disability case has been denied because I lack a diagnosis, so to survive I have drained my last reserve, my 401K plan, to avoid becoming homeless for now. I’m also still looking for doctors to help me, though most doors have been permanently shut – I’ve been told “No” for what they feel is the final time.

I have no spouse, plants, animals or children, so I’m totally willing to sign up for studies. Medicine and science need to catch up to our bodies; my condition needs to be believed and understood.

Thank you Chelsea for sharing your inspiring story!

If you have a story to share with our readers about participating in a clinical trial, overcoming adversity or living with a chronic condition, please let us know. We’d love to have you guest blog for us. Guest blogging helps others outside of your disease area learn about your struggles and discover your passions. We will help promote your website and social media accounts, as well as your favorite advocacy group. Contact us to get started sharing your story now!