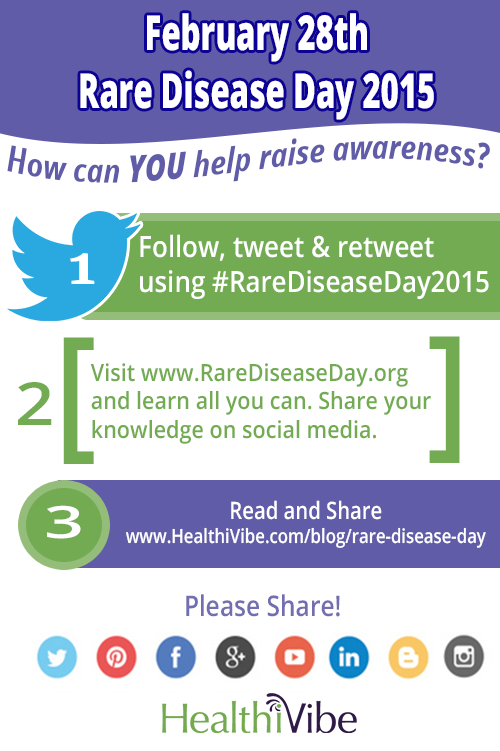 From loss of eye sight to some of the deadliest forms of cancer, people around the globe are battling conditions for which there are often no effective therapies. There is strength in numbers, and those who are diagnosed need the understanding and compassion of the rest of us. We need to amplify their voices and help raise awareness so they can hope to lead healthy, happy lives.

Tomorrow, February 28, is Rare Disease Day. In honor of those whose lives are touched by any of the more than 9,000 rare diseases, we’ve curated these stories and events from around the web. Take a moment to learn all you can and share with others. It’s so important that these rare diseases aren’t swept under the rug.

Participants from around the world have shared their Rare Disease Day stories on www.rarediseaseday.org. Learn how lives are touched by rare diseases, and do your part to help raise awareness by sharing on Facebook and Twitter. http://www.rarediseaseday.org/tell-your-story/.

In Her Words: Kristen’s Story

You may never have heard of Ehlers-Danlos Syndrome, but to someone who has it, dealing with symptoms is part of their daily life. Read 17-year-old Kristen’s story at NationalBound.tumblr.com, and follow her on Twitter @kgiff77.

Don’t Take Your Vision for Granted

Help spread the word about rare genetic macular dystrophies. According to the Macular Society, “they are a result of faulty genes inherited from one or both parents. Juvenile macular dystrophies cause the loss of central vision as a result of damage to the macula, the most sensitive part of the retina.” Learn more at Macular Society. Follow them on Twitter @MacularSociety.

DystoniaAware.org is raising awareness with their “Jump for Dystonia” campaign. According to their site, “Dystonia is the third most common movement disorder, yet most have never even heard of it. The brains of people with dystonia send improper signals to the muscles which can cause awkward postures, tremors, spasms, and painful body contortions. Dystonia can affect one part of the body (focal) or many parts (multi-focal or generalized). It can affect an individual’s ability to walk, talk, eat, drink, see, and even breathe.” Follow them on Twitter @DystoniaAware.

A crowdfunding campaign launched by the AKU Society to support those living with Black Bone Disease is underway on Indiegogo.com to raise money to bring patients to the UK in order to study this very rare genetic condition.

“Black Bone Disease is also known as alkaptonuria, or AKU,” the campaign description explains, “It is a genetic disease caused by a build-up of acid in the body which attacks bones and other tissue, turning it black and brittle. This causes severe joint damage in patients, and can even result in heart disease.

Black Bone Disease was the first genetic disease to be discovered more than 110 years ago. It still has no approved treatment. We want to change this.” Follow them on Twitter @AKUSociety.

Another crowdfunding campaign underway on KickStarter hopes to raise enough money to bring Bea’s story to the big screen.

“Bea is about a young girl with a disease so rare, no one else in the world has it,” according to the campaign, “Bea Rienhoff was born with distinct physical differences and diagnosed at an early age with an ‘orphan disease’. An orphan disease is defined as rare, often with unknown causes affecting a small percentage of the population. Throughout her childhood, her father Hugh has devoted his time to discovering what her specific genetic variation is, being labeled a biological outlaw for his unprecedented approach to finding answers. As Bea starts to get older, more and more questions arise about what physical and emotional challenges she will face as she nears adulthood.”

The film is important because “with rare disease affecting 25 to 30 million Americans, this is not a singular story. The reach of this film is far greater, as that statistic doesn’t even begin to count families of rare disease patients.” You can follow them and help spread their message on Twitter @BeaTheFilm.

This is only a small slice of the stories out there that need our help in being told. You can help by sharing these stories and more on Twitter, Facebook, Instagram and Tumblr, using the hashtags #RareDiseaseDay2015 and #RareDisease.

Your voice matters – together we can speak up for those who are underrepresented and help them be heard.