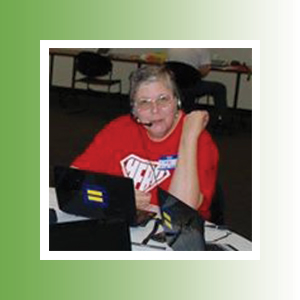 This guest post comes to us from Virginia Parks who has been a health activist for quite a long time. This is her story about clinical trial participation and what it has meant to her.

My personal experience with clinical trials began in the late 1980’s when I participated in Phase III research to earn extra cash in Austin, Texas. Then I became an AIDS activist. That led me to San Francisco in 1991 where I volunteered with various advocacy organizations focusing on treatments for women and children. In 1993, I was elected as a community representative to the National Institutes of Health’s Pediatric AIDS Clinical Trials Group (ACTG) contributing to the development of ethical research protocols for children with HIV and pregnant women.

I also worked at an H

IV clinic that conducted community based research and facilitated some of the early Expanded Access AIDS programs. These programs prov
ided access to experimental treatments to patients that could no qualify for or access a clinical trial. We collected data in exchange for the pharmaceutical providing the drugs for free. Lastly, I recruited participants for the groundbreaking Herzenberg Lab at Stanford which tools to better monitor patients’ disease status.

Begin in 1977, Food and Drug Administration (FDA) guidelines limited the participation of women in Phase I and II clinical trials. In great part due to AIDS activists, those restrictions were lifted in 1993. However, women were not flocking to clinical trials as researchers anticipated. I explained to my ACTG colleagues that women have different lifestyles and motivations than the gay men they were accustomed to enrolling. The availab
ility of more treatment options also meant women were not as desperate as in previous years.

A sympathetic behavioral scientist suggested I present my theories about recruiting women to researchers in the only language they understand. So I designed my own study! My survey of 66 HIV+ women, “Regarding Research: HIV Positive Women Consider Clinical Trials,” was created to simply to prove a point to researchers I knew, but was selected for presentation at the 1996 International AIDS Conference.

I found that geography was a strong indicator of prior participation in a clinical trial as was level of education. Women living near a research institution (especially one that also provided care) were more likely to have enrolled in a study as were women with college degrees. Women were also more likely to enroll if their doctor recommended it. As expected, they wanted to be reimbursed for expenses such as transportation, missed work, and childcare. What surprised many (but not me) were the low-cost and most cited motivators: to be treated with respect, have the research explained so they understood, and to contribute to our knowledge of HIV.

At the same time, HIV positive friends complained about the small percentage of female participants in research and limited data on women. Eventually my reply became one simple question, “How many studies have you enrolled in?” Often the response was, “None but…”

They had good reasons; fear, time, resources, etc. Many felt someone else should do it. I suggested perhaps they were the someone else for other women equally overwhelmed and fearful. I knew my simple question repeated over and again had sunk in when a friend told me about listening to a presentation in which the researcher apologized that the study included only a handful of women. Just as my friend was thinking to herself, “Here we go again!” she heard my voice in her head asking, “Did you enroll?” This friend and others participated in my survey and went on to enroll in other research.

Perhaps the most important study I have been part of collected safety (but no efficacy) data. Today people with HIV might take one pill to their predecessors’ three. Before those combination pills were developed, someone had to determine whether they were safe and effective. Initial safety studies were conducted in HIV negative participants due to the dangers of randomly switching up treatments in people with HIV. When the University of California at San Francisco (UCSF) was enrolling for such a study, I received phone calls from multiple friends reminding me that it was my turn to put my turn. Two women enrolled at UCSF.

It was a two week study during which participants spent three nights per week in the hospital, taking a different combination of protease inhibitors each night. Due to multiple blood draws to measure drug levels and look for side effects, we had IV’s put in. We were supposed to have a new one each visit to the hospital. However, I have really bad veins and on my second visit nurses realized it would be a problem that could prevent me from completing the study.

Asked if I could follow very strict care instructions, UCSF secured a special protocol exemption allowing me to go home with the IV, enabling me to have only three insertions instead of six. For two weeks with IV securely bandaged, I could only go to home or hospital. I showered only at the hospital so staff could assure it was properly waterproofed. Nurses put ice packs on my arm between draws to prevent swelling and traded them out for a warm pack just before so blood would flow freely. It was the longest two weeks of my life but every time I meet someone living well on combination HIV therapy, I know I helped make that happen.

Since then, I have participated in a woman’s health study testing a new cervical cancer detection tool and am currently in a registry to advance our understanding of early Alzheimer’s. My mother died of the disease. She was diagnosed late and declined quickly. I know that I am at risk of developing Alzheimer’s but refuse to go gently. I exercise my mind and body; and if I develop the disease will continue to contribute as much as possible to science. If I cannot save myself, maybe I will be the “someone else” that saves others.

Thank you, Virginia, for your inspiring story — and your untiring dedication to participation. We CHEER for you!  Thanks to CureClick for connecting us with Virginia through a collaborative effort to help clinical trial patients share their stories.

If you have a story to share with our readers about participating in a clinical trial, overcoming adversity or living with a chronic condition, please let us know. We’d love to have you guest blog for us. Guest blogging helps others outside of your disease area learn about your struggles and discover your passions. We will help promote your website and social media accounts, as well as your favorite advocacy group. Click here to get started sharing your story now!