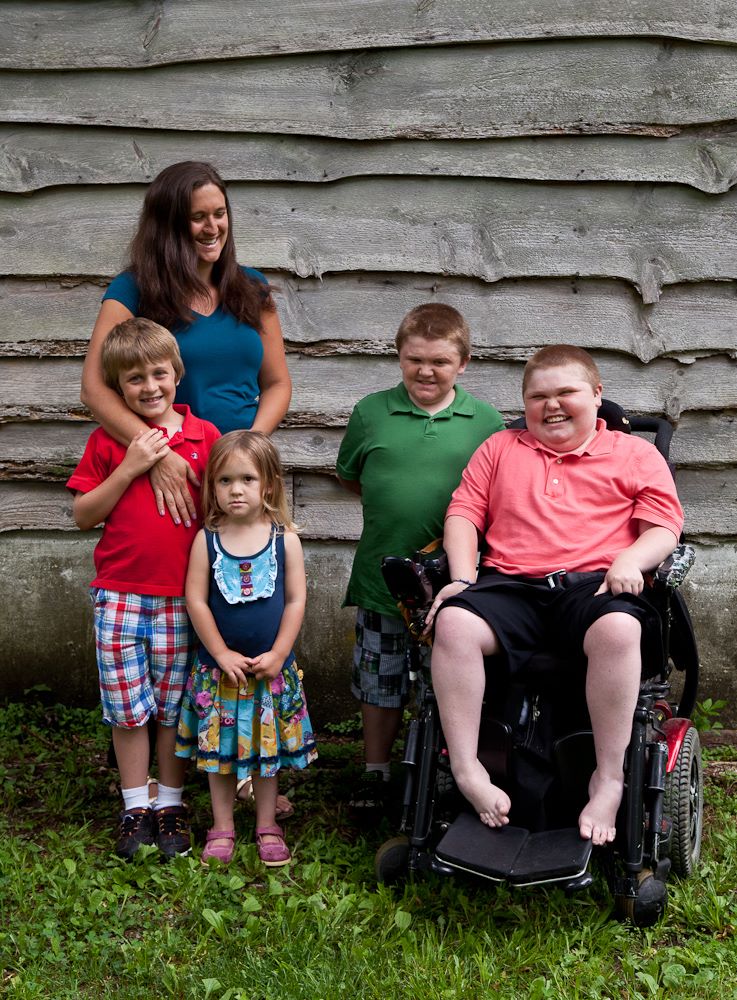 This week in our Through the Patient Lens series we bring you Jenn’s story of how Duchenne Muscular Dystrophy has touched the lives of her family.

Jenn McNary is a single mom of 4 children living in Pembroke, Mass. She currently works as the Director of Outreach and Advocacy at the Duchenne focused Jett Foundation located in Kingston, Mass.

The phone rang. I was holding my three month old son Max in my arms, having just returned from a walk with my two sons and four other children enrolled in my home childcare program.

Three year old Austin was whining at the bottom of the stairs that he needed to climb to get into our raised ranch home. “Mommy, carry me…” “Mommy I’m too tired, carry me”. I shushed him and grabbed the phone in the kitchen.

The voice on the other end asked if I could come into the pediatrician’s office to meet with the doctor. “Mommy come pick me up,” Austin whined. I told the nurse that I couldn’t possibly come in, I was home alone with six kids, I asked for the results of Austin’s blood work over the phone.

She hesitated, “Ma’am, we really need you to come in, but I’ll put the doctor on.”

I heard hushed voices, and the main pediatrician of our hometown practice drew in a breath slowly and said, “Are you sure you can’t come in? I would rather do this in person.”

I glanced at Austin, a lump at the bottom of the stairs, refusing to walk up. My eyes watered but didn’t leave him as the doctor gently explained his diagnosis. Muscular Dystrophy, a type called Duchenne…progressive…wheelchairs….heart problems…respiratory distress…no treatments…

My heart broke as I looked at my little boy, struggling to crawl up the stairs, the other children his age hopping past him two steps at a time. I mumbled something and ended the conversation with a scheduled appointment to discuss “next steps” as I walked down the stairs and lifted Austin the rest of the way up.

Austin was born a healthy baby. He was 9lbs, with chubby cheeks and blue eyes- all fingers and toes accounted for.  As a young mother, having just graduated high school, I was a little unsure what to expect from him, but noticed early on that he wasn’t developing like others his age.

I frequently brought my concerns up at well-child visits with our pediatrician, but I was told Austin was simply lazy, spoiled even. I practiced “baby wearing” and was still carrying Austin in a back pack well into his 2nd year.

The doctor advised that I should refuse to carry him, force him to walk the stairs in our multi-level home. Ignore his whining and he would develop the muscles he needed. In hindsight now, with 4 children and 14 more years of parenting practice, I know that I should have listened to my son, to my gut, and I will never get over the guilt.

When Austin was diagnosed in April of 2002 (and his baby brother shortly after), I had no idea what Duchenne was, but it became my mission to find out as much as I could about the disease plaguing my children–and to find them the best possible care.

Despite locating and attending the best clinic possible, over 16 hours from our Vermont home, this disease would not be stopped. Even the best doctors could offer little more than preventative care, barbaric bracing and heel cord release surgery, and corticosteroids which may delay loss of strength with a largely unknown mechanism of action.

I was, more often than not, advised to simply take the boys home and give them a good life, keep track of their decline and adjust by providing heart medications and ability devices.  It was a devastating thing to be told…there is nothing at all you can do.

Through the years our days became more difficult. By age 9 it was clear that Austin’s walking days were numbered. Each morning I would listen for the thump of his bare feet hitting the wooden floor, and the familiar shuffling down the hallway, often peppered with falls to the floor – an echoing thud.

Austin took his last steps in Disneyworld when he was 10.5 years old. When we returned home he was fully non-ambulant, and our world seemed to revolve around this new normal. Routine every day tasks with a child who cannot walk are sometimes nearly impossible.

My days start with lifting now 125 lb. Austin into his power wheelchair, taking him to the toilet, brushing his teeth and hair for him, applying deodorant and dressing him, scratching the itches that his weak arms cannot reach.  Austin has to take a handful of pills every day, but also suffers from reflux, so I toss meds in, while holding a bowl under his chin, hoping that he will be able to keep them down.

His medications have side effects, some very similar to the symptoms of the disease itself so it’s hard to tell the difference. He has brittle bones, which makes fractures inevitable – and lifting him comfortably incredibly difficult–and sometimes painful (for both of us).

He has cataracts developing from the long- term steroid use, but I am afraid to remove the steroids and have him lose the little strength he has left. Children and young adults with Duchenne lack the critical protein dystrophin. With every move their bodies make, the breakdown of muscle occurs, resulting in functional loss throughout their bodies.

By age 8 boys are falling frequently, by 12 most are using wheelchairs full-time, by mid teens they usually have diminished cardiac and lung function and soon after loose the ability to breath, eat, move at all on their own. Most young men lose their lives as their heart stops beating or their lungs stop functioning in their late teens. They die a quadriplegic in most cases, totally dependent on their family for care, just when most of us are spreading our wings and becoming autonomous. This is the story of Duchenne, but I still have to hope this is not our story.

Thank you, Jenn, for sharing your caregiver story!  Be sure to check back next week to read part 2 of Jenn’s guest blog post.

Do you have your own inspiring message to share? Please visit Share Your Story and tell us about it. We’d love to hear from you!

For more installments in our #PatientLens series click here.